If I had to sum up 2017 in one word, that would be it. Although from a personal perspective, it was positive and serene, world events were at best, surreal, and at worst, terrifying. A year when lies were rebranded as ‘alternative facts’, ‘pussy hats’ became a ‘thing’, and we thought La La Land being announced the winner of Best Picture at the Oscars was going to be the biggest Hollywood scandal of the year.

For the UK, as expected, it proved to be a year of growing uncertainty, and some of our worst nightmares came true in the form of multiple terror attacks and the Grenfell Tower fire.

Many of us use the new year as a time to reflect. Retrospection not only plays an important part in learning from our successes and failures, but could also provide insight into how political, cultural and business events could shape how we behave, interact and build relationships in 2018. Here are my thoughts.

We kicked off the year watching Donald Trump being inaugurated. Many of us tried to pinch ourselves out of our lucid, dream state.

For Obama supporters, it felt as if a smart, fair and positive human was handing over power to the Night King. The apocalyptic feel of this transition grew exponentially throughout 2017, as we watched two grown men – from East and West – exchange threats of nuclear war, as flippantly as ‘your mama’ insults.

Most of us have worked for at least one autocratic lunatic, sorry leader. That unreasonable human who comes into work to earn more money than everyone else, and spends all their time making people suffer for it. What we did start to see in 2017 was the demise of some of these reigns of fire and fury. This could be a glimmer of hope for anyone that continues to be subjected to poor or destructive leadership. The longer they remain in positions of power and responsibility, however, the greater the cost to those around them.

From one autocratic leader to another: Harvey Weinstein’s career came crashing down with the ferociousness of a gigantic wall being obliterated by a fire-breathing Ice Dragon. (Ok, no more Game of Thrones references, I promise). It was a bad year for misogyny, sexual harassment and assault, but an important win for the safety of women, in and out of the workplace. The momentum of both ‘Me, too’, and this year’s ‘Time’s Up’, campaigns in America are a sign that the walls are closing in on this behaviour.

Another great year for Twitter, which was endorsed as the medium of choice by the leader of the free world – Trump, not Merkel. It proved hugely successful for him in his election campaign, and continued to allow him to communicate in an unprecedented manner for a world leader.

Twitter delighted, disappointed and educated us all in 2017. How else would we have known know what ‘dotard’ or ‘cofveve’ means? Anyone?

Although the #metoo campaign has to be my social media hero of the year, Southern Rail’s work-experience student, Eddie Smith, won the nation’s hearts with his innocence and smart wit during the #askeddie Q&A. No one could have predicted what a much-needed boost for their PR he would be. 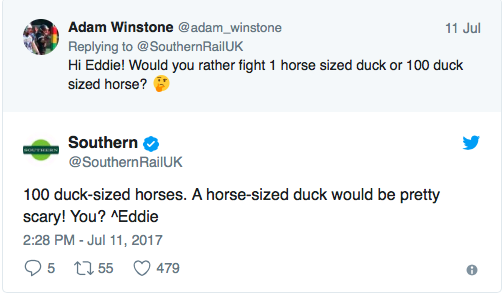 In third place, former Labour Leader, Ed Miliband for this: 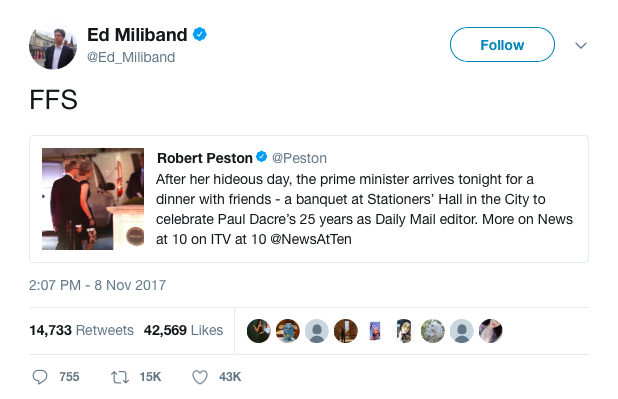 Spot a gap in the market; create a new product to sell; win. It’s as if I’d coached him myself.

Emmanuel Macron, leader of a relatively new political party at the time of his election win, reminded us that this process works for selling an ideology, as well as a product.

What else did we learn from the new French President? That the oldest form of business communication – the handshake – was more important than ever when asserting yourself in your peer group. The length of your handshake could make up for other deficiencies, it seems. I watched this bizarre machismo over and over when it was first hit our mini-screens, and closed my eyes trying to picture two women in the place of the French and American Presidents. *Shuts eyes* No, still nothing.

As well as usurping Trump’s signature handshake, Macron stole his election-winning ‘MAGA’ catchphrase, rebranded it into something positive for every species on Earth and is taking steps to  “make the planet great again”. Macron’s leadership showing the world that this new breed of young centrist could counterbalance the more negative column inches, allowing the rest of us some hope. And isn’t that what we really need our leaders for? Hope.

June’s election turned out to be ill-fated for the government, and proved that not having your finger on the pulse of your ‘customers’ is a recipe for disaster. How many leaders can truly thrive pursuing a strategy of no face-to-face engagement and using platitudes versus ‘real talk’? This landed Theresa May in fox poop so deep, that the results had her wishing for more carefree days of running through fields of wheat. If you want people to buy what you’re selling, you need to get out there and sell it to them. To their faces.

The man responsible for leading the UK through the biggest change in its history admitted “I don’t have to be clever to do my job.”

A positive year for diversity, with the appointment of Edward Enninful, as the first black, male and gay editor of Vogue UK, while BP appointed its first female, black CEO, Priscillah Mabelane, in South Africa.

Meanwhile, back in London, a Muslim immigrant proved that if you’re the best at what you do, your religion, colour and origin of birth can be accepted by the country and its elite, which says something about the high bar we set for acceptance. Arise, Sir Mo Farah.

17-year old Malala Yousafzai – UN Messenger of Peace and Nobel Laureate – secured a place at Oxford University. For those of us who have followed her incredible journey, it felt as though the wrongs of the world were righting themselves a little for future generations.

In 2017, two of the world’s superpowers swapped personalities. While the US dropped out of the Paris Agreement, China increased its commitment. Its investment in renewable energy will be in the region of £292bn by 2020, creating around 13 million jobs.

And so it emerged that Russian hackers had influenced not only the US election, but also the Brexit referendum, putting security at the top of everyone’s agenda in 2017; something that will continue to be a priority in 2018 and beyond.

The already encumbered NHS was crippled by a cyber attack in the first half of the year, and British Airways flights were grounded amidst chaos caused by a power surge, costing them in the region of £80million and stranding 75,000 passengers.

In 2017, Artificial Intelligence and crypto-currencies were no longer esoteric concepts happening in ‘science world’ or in the Dark Web (cue The Imperial March). By the end of the year, having in-device AI in our smartphones and asking Alexa to play ‘70s disco had allowed some of us to form a less dystopian view of technology mimicking the human body or mind. For now.

And the year ended with the Winklevoss brothers (of “we invented Facebook” fame”) becoming the world’s first Bitcoin billionaires, getting a staggering return on their initial $11million investment.

As a crude poll on the debate of whether trickle-down economics works, US CEOs were only happy to oblige with an honest response. At a Wall Street Journal event in November, when asked by a show of hands how many CEOs were planning on increasing investment should Trump’s new tax reform bill be passed, the answer was a resounding ‘very few’.

While the UK ended its turbulent year with 14 million people in poverty*, Iceland proved again that not listening to your citizens, behaving corruptly and failing to govern by principles of fairness and equality for all will lead to the demise of your leadership.